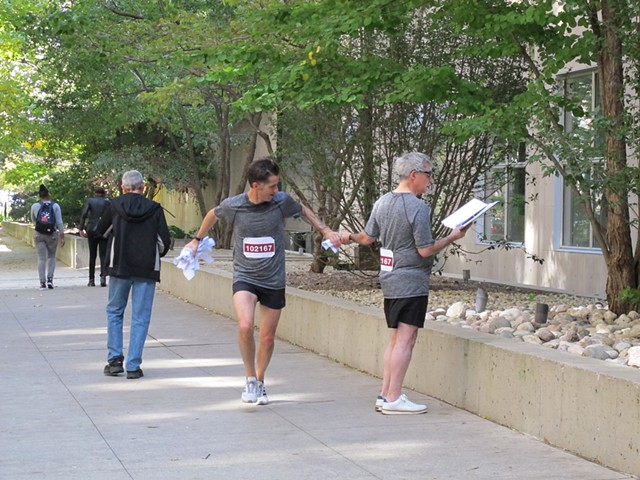 In collaboration with Fred Schmalz. Presented as part of the Museum of Contemporary Art's weekend celebration of its 50th anniversary,Tracking Shots takes place exactly 50 years after the founding of the museum (21 October 1967) and stages a reading of social and political events as reported in various newspapers and magazines at the time. Marathon runner, artist and poet Fred Schmalz runs counterclockwise around the museum's perimeter for two hours; simultaneously, Lou Mallozzi makes one two-hour clockwise circumnavigation of the museum, reading these texts of reportage verbatim to the building. Their intersecting orbits recall some of the real and metaphorical instances of encircling and estrangement that marked the tumultuous historical moment whirling around the embryonic MCA in 1967. The rhetoric of the texts -- at turns disturbing, naive, or poignant in their anachronism -- remind us that the language used to present facts is itself a slippery and highly contextual construct, and perhaps show us how far we've come and how fixed we've stayed.